What is canyoning? Challenge for the brave or fun adventure? 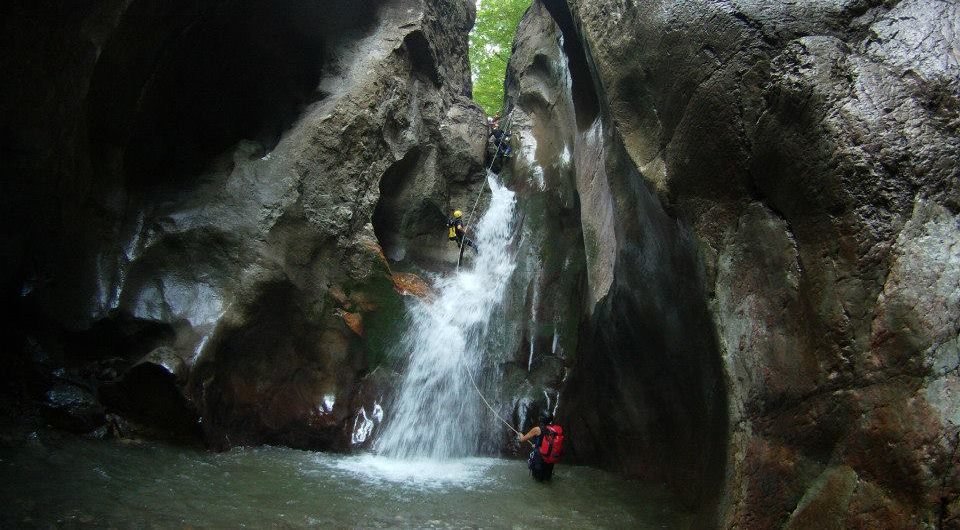 Canyoning means passing and descending through a riverbed with or without equipment. Lowering waterfalls and walls with or without ropes, crawling through cracks, jumping into pools filled with water and diving, are the main activities on canyoning. The emergence of the canyoning reaches into the distant past, when it was to enter and draw to every place in the area in search of food. People in the prehistory could not even dream that their daily cruel struggle for survival will be some kind of fun in some future generations. A newer canyoning history is related to the event from the end of the 19th century, when an alpine climbed into a narrow canyon filled with water and left alive and healthy. What equipment is used for canyoning? Depending on the weight of the canyon, various equipment is also used. For canyoning, parts of the equipment of other activities are used, mostly alpine. The most basic part of the equipment is a helmet, an earmuff and a static rope, and if the water is cold and neoprene (diving suit). Depending on the weight and the exposure, the lowering safety wedges are also used. Where to go to the canyoning in Serbia, and where in the surrounding countries? In Serbia, you can go to canyoning tours in several locations, such as: Relatively light: Beloj Rzava canyon, Brnjički brook, Zlotski canyon, Crna rijeka canyon Medium weight: Lazarev canyon, Dubrasnica, Mileševka canyon Weight: Tribuće canyon, Canyon of Brusnica, The Raca Canyon The passage through some of these canyons, where the dry trough is, means only the pedestrians passing by skipping and crossing the obstacles. The equipment you use in this case is similar to the hiking. From the surrounding countries, you can go to the canyoning on the following locations: Canyons in Montenegro: Nevidio, Medjurečki brook, Škurda, Bogutovski potok, Rikavac, Cijevna, Mrtvica Canyons in Bosnia and Herzegovina: the canyon of the Hrčavka river During what year is the canyoning tours? Depending on the type of canyon, yes

Canyoning means passing and descending through a riverbed with or without equipment. Lowering waterfalls and walls with or without ropes, crawling through cracks, jumping into pools filled with water and diving, are the main activities on canyoning. The emergence of the canyoning reaches into the distant past, when it was to enter and draw in every place in the vicinity

If you are a fan of the nature of mountain villages, delicious traditional food and adventurers, these two villages in the vicinity of Prijepolje that have been declared as natural assets of exceptional importance should be on your list of sightseeing tours. What is unique about these two villages? Mountain villages of broken type with few inhabitants. They are located at 1000 m -

What is via ferrata? 8 tips for beginners

Via ferrata or steel paths are paths along the walls in which the steel ladders are used for climbing. They were created during the First World War for the needs of the Austrian and Italian armies in the Dolomites. These are tracks along the walls arranged with iron tools. In present time they represent a true tourist attraction because they are located in attractive areas. The "Steel Path", as it is still called, is intended for all those who want to climb the walls, but have no alpine experience. This is actually the first step towards alpinism, because the feeling is similar, you are on the wall, your legs are on the ladder, but you are also secured for a steel wire that is usually followed by ferret. Via ferrata can be vertical and horizontal. Is climbing via ferret safe? 1) Climbing via ferat is completely safe, but requires some physical effort and attendance. Participants are expected to have the physical condition of a person walking for at least 30 minutes a day or a person able to climb the stairs to 10 floors without any special effort. Participation of persons over 120 kg is not possible, as well as underage persons under 15 years of age. Parents' written consent is required for the participation of minors from 15-18 years of age. Via ferrata is not recommended for people who are afraid of height. 2) Guides and mandatory climbing equipment via ferrata (rope, helmet, belt and gloves) provided by the tour operator Technical equipment used for climbing on ferries has evolved and improved from time to time and from unsafe to up-to-date and complete with high degree of safety and comfort. What is the equipment for the ferrat you receive from us? All the equipment used is certified and certified by the relevant institutions. Only equipment intended for this purpose is used, it is certified according to the international UIAA standard (Union International des Associations d'Alpinisme

Via ferrata or steel paths are paths along the walls in which the steel ladders are used for climbing. They were created during the First World War for the needs of the Austrian and Italian armies in the Dolomites. These are tracks along the walls arranged with iron tools. In present time they represent a true tourist attraction because they are located in attractive areas. "Steel

Paragliding offers the possibility of great adventures, challenges and glimpses of the beauty of the area above which it is flying. It does not require too much financial resources and time. Paragliding is one of the youngest aerial sports and is intensively developing. Like other adventurous activities it involves risk. The most important preconditions for learning safe flight are: personal attitude, competent training and safe equipment.