Magnificent Djerdap gorge, better known as the Iron Gates is the longest and the deepest gorge in Europe

The Danube in the Celtic language means river or water. It is not known when the first wave of the Pannonian sea began to deepen the massifs between the Balkans and the Carpathians, opening the Iron Gates and creating today’s Djerdap. To this wondrous nature, the Persians gave the name Girdap or vortex. Roman soldiers, according to the order of the emperor Trajan, crossed the path through the Djerdap walls. It had great strategic and economic significance for the Roman Empire.

The Djerdap National Park (the Iron Gates) lies in eastern Serbia, on the border with Romania. The magnificent gorge, better known as the Iron Gates is the longest and deepest in Europe. It stretches for a distance of around 100 km. It is composed of a whole series of gorges: Golubac, Gospodjin Vir, Kazan, and Sip, separated by three valleys.

Djerdap is a natural fortification that abounds in historic and cultural localities, some of which were inundated when the Djerdap Dam was constructed. Others, such as the Lepenski Vir archaeological site and the Trajan’s Table were relocated.

The National Park extends for 100 km along the Danube, between the towns of Golubac and Karatas. In this area, the Danube is the widest (sometimes even up to 2 km where the artificial lake now lies). It is also the deepest and the narrowest (only 150 meters at Kazan). The fauna and flora of this small area have not changed since Pliocene, with ancient plants and animal groups that survived the Ice Age. There is a special kind of tulip that grows only there and is therefore called the Djerdap tulip. The animal species are also very old and diversified. There are rare species such as lynx, jackal, and otter. Sturgeon can be found in water areas.

Let’s explore the best things to do in Djerdap National Park:

Golubac fortress is located at the entry to Djerdap gorge, 4 km from the town of Golubac, on the location of the Roman fort Cuppae. It was mentioned the first time in the XV century, but there are indications that it was built earlier.

It stands on a strategic point at the very entrance to Djerdap Gorge. This fortress, the most beautiful on the Danube, was erected before gunpowder came into use. It has nine high rectangular towers with walls going all the way down the rocks to the river. It was adjusted later to the new type of weaponry. In the period of the Turkish occupation (in 1480) a cannon tower with a polygonal base was added right next to the river.

Built on a steep rocky bank over the river and was used until the Turks went away. It is considered one of the more picturesque and preserved medieval buildings.

The name of the fortress and the modern town in its vicinity can be translated as the „Pigeon City” or the „Dove city” (golub, „pigeon”). The exact reason for the fortress’s name is not known and only the myths of the origin of the name exist.

The most popular, but obviously also much later myth, is that of a beautiful Serbian girl named Golubana. A local Turkish Pasha fell in love with her, but she loved a young Serbian man and rejected all the proposals and expensive gifts from the Pasha. Angered, he took her down in a boat and either imprisoned her in the only cone-roofed tower or tied her to the rock above the river and left her there until she died.

Because of its historical significance and exceptional architectural value, the Golubac fortress has proclaimed a monument of exceptional importance in 1979.

2) Come to know the prehistoric culture of Lepenski Vir

Lepenski Vir is one of the largest and most important prehistoric archaeological sites.

It is located on the right bank of the Danube in the Djerdap Gorge, 46 km from Golubac and 14.5 km from Donji Milanovac. The site was named after the Danube vortex. It was the center of one of the most important and most complex cultures of prehistory.

It dates from 6700-4500 BC. The location itself is magnificent and is one of the most important archaeological sites in the world. Lepenski Vir consists of several layers of remains of settlements of fishermen and hunters and a regional holy site. The found artifacts, graves that depicted unusual funeral rituals, various tools, and jewelry made of stone, horns, and bones, as well as plates with engraved signs-like characters, indicated that the original hunting-gathering communities had established complex social relations.

In the center of the settlement, there was a spacious square, which was the place for performing various rituals. Based on the shape and proportions of the habitat, there is a conclusion that the builders of Lepenski Vir had dispositions with certain mathematical knowledge.

Around the hearthstone, there were sculptures of large pebbles that depict the human figure on which only the head was originally formed. At a later stage, sculptures are shaped like a human figure and become real idols. They are the most commonly modeled fisheries of the human head, fish, deer, and on the found objects are engraved puzzling performances: signs similar to the coordinate system, sketches, letters, numbers, regions.

If you take hiking tours, be prepared for breathtaking views to spectacular gorge and the mighty Danube. You will see the variety of relief, high biodiversity of important and unique species in this magnificent national park.

There are numerous hiking trails you can take in the Djerdap National Park. They are marked but we highly recommend you to go with a guide. You can also contact the office of the national park Djerdap where you can also find descriptions of some hiking trails.

You can combine hiking with sightseeing of important cultural attractions, such as Golubac fortress, and Lepenski Vir. There is our recommendation for a moderate hiking tour that is a combination of sightseeing and with beautiful views of the mighty Danube.

The Djerdap gorge is the place where the Danube River is the most powerful.

You can choose different tours. Some last from 1, 2, 3 or 4 hours or whole-day tour that lasts around 10 hours.

Shorter cruising tours you can take from Golubac, Donji Milanovac, Tekija or Kladovo.

If you like more to spend a whole day on the Danube river, you can take the cruising tour from Belgrade. It connects main ports on the route: Belgrade – Smederevo – Ram – Veliko Gradiste – Golubac – Djerdap Gorge – Donji Milanovac – Tekija – Kladovo

The most attractive spots of the Djerdap gorge you can see only from water, during cruising through Mali and Veliki Kazan are:

Tabula Traiana – a Roman memorial plaque, 4 meters wide, and 1.75 meters high, commemorating the completion of Trajan’s military road. The Roman Emperor Trajan left a permanent imprint on the rock. The Tabula Traiana was declared a Monument of Culture of Exceptional Importance in 1979 and is protected by the Republic of Serbia.

Trajan’s Bridge was a Roman segmental arch bridge, the first bridge to be built over the lower Danube and one of the greatest achievements in Roman architecture. The bridge was constructed in 105 AD by the instruction of Emperor Trajan, as a supply route for the Roman legions fighting in Dacia.

The rock sculpture of Decebalus – 42.9 m in height and 31.6 m in width carving in the rock of the face of Decebalus. He was the last king of Dacia, who fought against the Roman emperors Domitian and Trajan. The sculpture was made between 1994 and 2004, on a rocky outcrop on the river Danube, at the Iron Gates, which form the border between Romania and Serbia. It is located near the city of Orșova in Romania.

5) Be active and explore the Djerdap gorge on a kayak

If you paddle a kayak in the Iron Gates you can feel the whole power of mighty Danube. Usually, kayaking tours go downstream passing behind prehistoric Lepenski Vir, through the Kazan Gorge, which is the most attractive part of the Iron Gates.  You will have the opportunity to go close to the rock sculpture “Decebalus Rex” – the biggest stone sculpture in Europe. You will also pass the Tabula Traiana – an antique inscription, placed by the Roman emperor Traian who marked his road and his many victories in Europe.

Kayaking tours last around 4 hours with breaks. We strongly recommend you to go on guided kayaking tours with experienced instructors.

Danube Bike Path through National Park Djerdap crosses around 110 km. This is a part of Eurovelo 6 that connects the Atlantic coast with the Black Sea and goes through Serbia in a length of 667 km. Entire Danube Bike Path in Serbia is marked with road signs in accordance with the European Cyclists’ Federation standards. 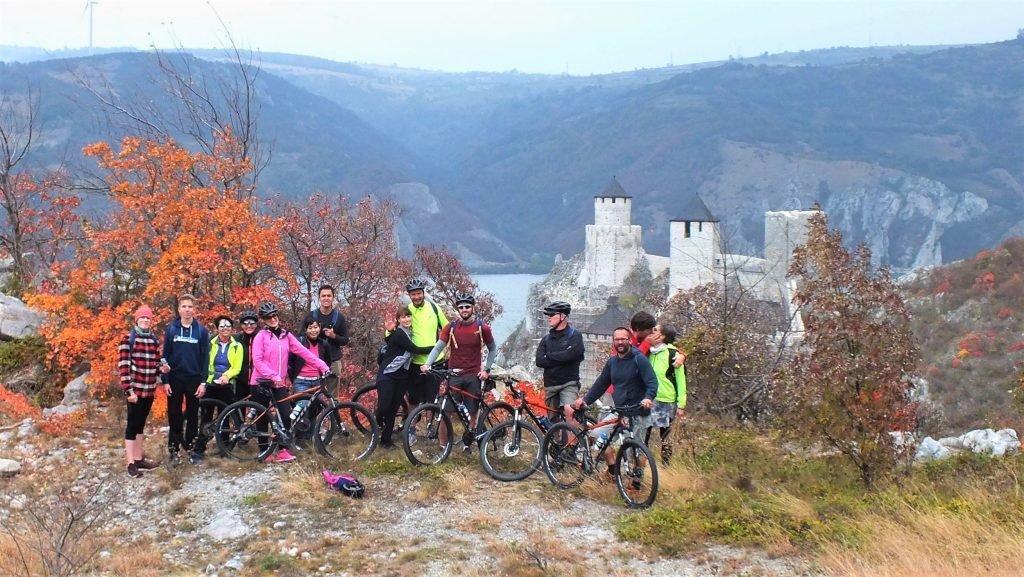 On a bike, you can visit all attractive viewpoints and cultural places. You can ride from Golubac to Donji Milanovac and continue to Kladovo and Negotin.

If you are going to explore the area in the zone of special protection by National Park Djerdap, please contact the main office in Donji Milanovac.

When you finish exploring this beautiful area, the best way to relax is to visit this nice place, close to Donji Milanovac. There is a spectacular view of the Danube river where you can try traditional food from this region. You can hear the story about the history of Djerdap and its cuisine.

You will see here an open-air gallery called “Man, wood, water.” It is a collection of sculptures made of wood and stone. The gallery occupies approximately 700 m² and its unique works of art are an enduring fixture at the complex.

Stevan
Reply
There is also Hydro Electric Power Plant - Djerdap that can be visited as a guided tour. There is a Canyon of Boljetin River, Monastery Tumane and Rajko`s Cave (not in national park)