Why Uvac is the place you must visit in Serbia?

Why Uvac is the place you must visit in Serbia?

Uvac Canyon and its meanders. The truly unique and magnificent destination of southwestern Serbia where more and more visitors come. Untouched nature, caves, lakes, endemic plant species and the last refuge of almost extinct birds - griffon vulture, are just some of the things you can see during a visit to this natural reserve.

It is the natural good of exceptional importance and under the protection of the Serbian state since 1971.

What is unique about the Uvac canyon?

1) In the Uvac canyon is nesting griffon vulture. A species of the eagle that named also as "the heavenly king" because of an imposing size. They almost died out in the area two decades ago.

Today there are about 500 eagles in the canyon. They nest on the steep and rocky edges of the canyon. Most of them are in the nest between 10 am and 5 pm.

Just like what the story Griffon vulture – love and devotion in the Uvac canyon, is saying, the griffon vulture is unique in many ways.

It is the largest bird in Serbia with a wingspan of about 3 m and an average weight of 7-8 kg, and it can reach 11 kg.

They can live up to 30 years, and they are monogamous – with one partner, remain for the rest of their lives. When a partner dies, they do not look for a new one.

Griffon vultures are fully matured at 5 years. The female bird carries only one egg, at the end of January or early February, and both parents are lying on it for 54-56 days. They breed on limestone rocks in group-shaped formed colonies. Couples very rarely live isolated. The youngster bird stays in the nest before the first flight for 4 months. 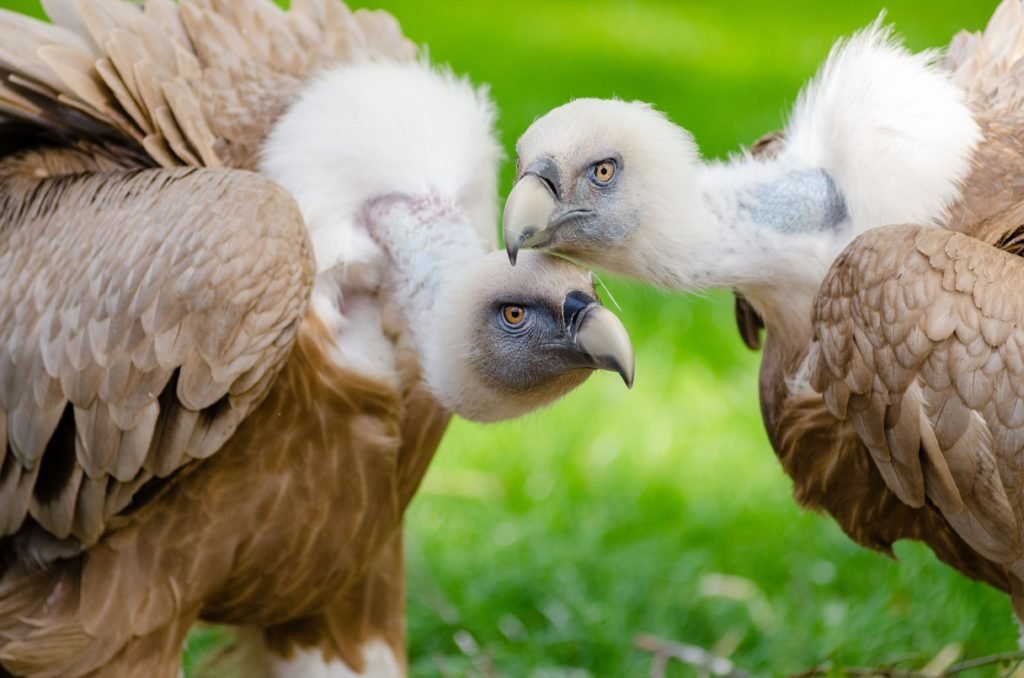 How does griffon vulture feed?

The role of griffon vulture is irreplaceable in the ecosystem chain - it is exclusively fed to dead animals, which prevents the spread of infection and thus makes natural recycling.

It feed exclusively to the corpses of medium and large mammals, mostly equidae and fennel (cows, horses, sheep, donkeys, deer), but also foxes, dogs, rabbits... It rarely attacks a live prey, only if it's a sick and an unhealthy animal. It is predominantly fed to softer tissues (intestines and muscles). A long, movable neck, covered with thick eiderdown, allows it deep penetration into the corpse.

It seeks food in groups. Regularly searches for a region of 50 to 60 km in diameter around the rest or nests, and often also a much wider area of 120-150 km in diameter.

They are better weather forecasters than meteorologists. When they start to rise to heights, 10-15 of them begin to circulate in a flock, that means there it will be a storm. Their range of wings reaches 3 m and almost do not wave wings as they fly without fear above, below and next to you. According to scientific research, griffon vultures are birds that use the best hot vertical air currents. Although they are heavy, they can climb up to 3000 m in height and fly at a speed of 60 km/h without effort.

The special nature reserve "Uvac" has introduced the chip process of each individual to be able to know where they are at any time.

Griffon vultures from the Uvac canyon had been flying to Israel, Estonia, Turkey, and a couple of years ago one youngster bird reached Yemeni traveling for 3400 km.

One was wounded in Israel and after he was cured in a veterinary station, they called the Serbian consul to attend the bird's release.

Griffon vulture, named Srecko, was the first mascot of the Olympic team of Serbia at the games in London in 2012.

This eagle was also on the coat of arms of dynasties Nemanjic, Mrnjavcevic, Lazarevic, and Crnojevic. Its stylized images were also shown in the monasteries Zica and Ljubostinja. It is also shown on American and other arms in the world. In Egypt, it was considered as a sacred animal.

The Uvac canyon is known for its breach meanders that the river cut into the limestone rocks.

Meanders of Uvac exist on three places in the canyon. The most attractive ones are upstream from the mouth of the river Velusnica, in the area called Lopiza. The canyon valley of the river Uvac with high and steep cliffs up to 350 m represents the center of the natural reserve. Looking from the height, the impression is that nature has doubted in which direction the river should flow. Therefore, the river makes beautiful river curves.

This area is also known for its caves, and the most famous among them are Usacka and Tubica cave (with a total length of 6.185 m).

The entrances to the caves are occasionally submerged, but even then boats can enter in them. They are full of ornaments.

Icy Cave is the most beautiful part of the Usacki cave system and tourists can visit about 700 m of the channel. It is located on the left bank of the Sjenica Lake, in the most attractive part of the canyon.

Meanders of Uvac you can view the best by taking hiking tour to the panoramic viewpoints. There is a magnificent view of the canyon.

Apart from Molitva ("prayer"), on the opposite side, there is a new viewpoint, which is called Veliki Vrh ("great top"). You can also reach both viewpoints from the lake. If you are going for a boat ride or a kayaking tour by the Sjenica Lake, after two hours of sightseeing and visiting the Icy Cave, there is the place where start hiking paths go to viewpoints. You can reach Molitva in 45 minutes in one direction, and Veliki Vrh in 30 minutes. The paths are not difficult for hiking. The path to Veliki Vrh is a little steeper than the path to Molitva.

How can you reach the Uvac canyon?

The special nature reserve is located on the territory of the municipality of Sjenica and Nova Varos, surrounded by the mountains Javor and Zlatar. If you are heading from Belgrade, the fastest way is through Ivanjica to the camp at Sjenica Lake. You can also go through Zlatibor, Nova Varos, Sjenica and reach the Sjenica Lake.

Things to do in the Uvac canyon and its surroundings

In addition to the mentioned hiking to sightseeing, boat riding and kayaking by the Uvac lake, you can go in the off-road ride by terrain vehicles along the Pester plateau, the slopes of Zlatar and Jadovnik, to the waterfall of Sopotnica.

You can visit the cultural sights in Sjenica the Sultan Valida mosque from XIX century. It is the foundation of Sultan Abdul Hamid II. This monument represents the golden era of Sjenica, the time when Sjenica was the seat of Sandzak - the administrative area in the Ottoman Empire. Architecturally, it is one of the most beautiful Islamic monuments in Serbia.

Another, very important monument of Islamic culture is the Mosque in the Angle built at the beginning of the 18th century. It is the oldest mosque in the territory of the municipality of Sjenica and has a very strong influence on the local population, that moved to Pester from Herzegovina, Montenegro, and Albania.

If you are a fan of good food, Paster specialties are well-known.

Sjenica cheese is one of the most famous in the Balkans, while lamb and veal are of exceptional quality. Pester is known for its traditional products, such as sudzuk (a type of sausage) and buckwheat dishes. In honor of the skill of pie preparing, every year in August traditionally is being held the manifestation "Days of Sjenica pie".

Explore Serbia
Explore Serbia is an organization that develops and promotes adventure and rural tourism of Serbia and the Balkans. We are adventurers who combine our personal experiences, interests, and knowledge in creating adventure tours.
Previous postGriffon vulture – love and devotion in the Uvac canyon
Next postShort guide for national meals in Serbia