Walking, hiking or trekking. What attracts you more?

Walking, hiking or trekking. What attracts you more? 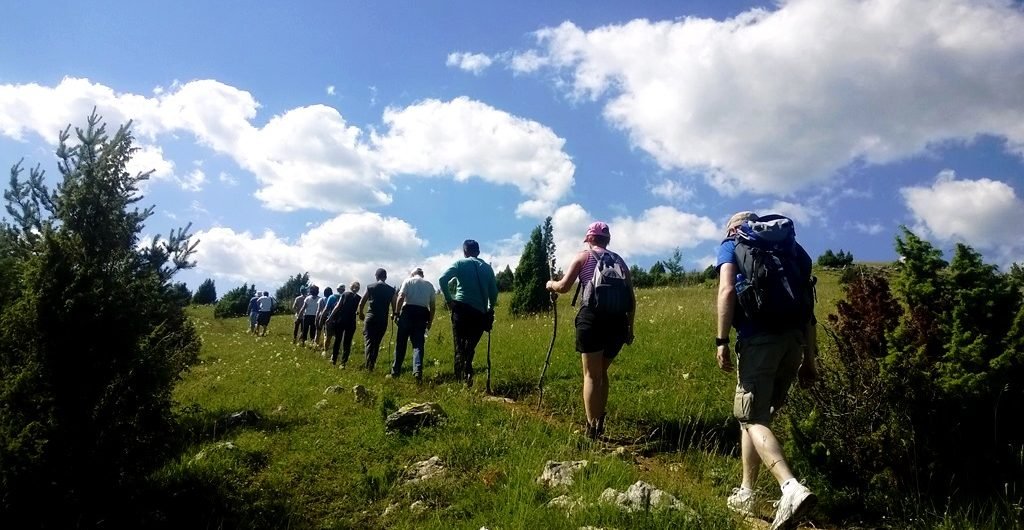 Hiking is a form of walking with the specific purpose of exploring and enjoying natural beauties.

Walking through natural areas that involves carrying the necessary equipment and all that is needed is a very popular recreational activity in many developed countries. People around the world enjoy hiking in nature, usually by already established trails.

Terms of hiking and trekking are English terms and there are no completely adequate expressions in the Serbian language that would explain the essential meaning of these activities.

Trekking would be a multi-day hiking, ie. hiking in the mountain and rural areas

It can also include overnight in nature - usually in a tent, and it is possible to use abandoned pillows or make your own shelter from natural materials. Trekking can be combined with other activities-exploring caves, canyons, etc. For trekking it does not require technical knowledge but strong will, good fitness and little specific equipment.

Hiking is the world's most popular form of adventure tourism. It will give you real emotional relaxation, it's good to get a fit.

Hiking often requires good physical fitness, it means walking a few kilometers, sometimes it is necessary to climb steep mountainous sides. Different terms are encountered, such as hiking, bushwalking, tramping, trekking or walking It can take hours, days or weeks.

Hiking or hiking is one of the most common types of tourism. Walking tours do not require special equipment or special preparation. Walking tours are among the most popular types of holidays in the population of developed countries with a high degree of urbanization. This is confirmed by continued growth in developed countries, such as Switzerland, Germany, Scandinavian countries, where the population of large cities use shorter breaks, but on a number of occasions during the year, mainly applying for tours involving hiking. There are many such paths, for example in Canada, and in Europe, along the pedestrian paths, Norway is the most famous.

For hiking and trekking equipment it is not different from hiking (not alpine). When it comes to the equipment and skills necessary for trekking, it should be noted that, except in cases when it goes to the famous terrain and if you do not go with a guide, a topographic map and elementary knowledge of cartography and orientation in the nature is necessary. It is also good to have a GPS device.

Where to go to hiking in Serbia?

Walking in Serbia is a more and more popular activity. If you want to join us on hiking tours, and you have no experience, look a few tips for equipment, clothing and nutrition.

In Europe officially there are 12 European Long Distance Paths, and the European Footpath Association, which is a member of the Mountaineering Association of Serbia, approved in October 2009 that two European pedestrian corridors - E4 and E7, pass through our country.

European pedestrian corridor E4 starts from Gibraltar and extends over Pirinea and Lake Constanta and Balaton, to Serbia where it begins at the eastern side of Kanjiža. The route continues through the Melenci, the Carska bara and the Deliblatska sands to Belgrade, Smederevo, Ram's fortress, and then to the Đerdap gorge continues to Gamzigrad, Pirot, the canyon of the Jerme River and the mountain of Ruj. Then he goes to Bulgaria and the road continues to the Greek island of Crete until Cyprus.

How did the idea come about?

Dinar mountains (Dinarides or Dinaric Alps) are a mountain chain in southern Europe, extending along the western part of the Balkan Peninsula through Slovenia, Croatia, Bosnia and Herzegovina, Serbia, Montenegro, Macedonia and Albania. They were named after the Dinara Mountain.

Dinarides make 200 special mountains with 240 peaks over 2000 m. The area of Dinarides marks over twenty national parks and sites under the protection of UNESCO.

These facts, as well as similar projects implemented in the Alps, such as Via Alpina contributed to the design of the Via Dinarica project.

Via Dinarica is a tourist product that represents a set of hiking and hiking trails connecting natural and cultural sights in the Dinaric area.

Paths extend along the entire Western Balkans in the length of more than 1000 km. Three main lines along Via Dinarica have been formed:

The green line includes the lower mountains of Dinarides and, through its work, passes through Serbia. Among other mountains, it covers the area of Tara, Zlatibor, Zlatar, Jadovnik, Golija, Kopaonik, Goc, Stolovi.

Via Dinarica also includes mountains in Kosovo, such as: Sharr, Prokletije, Mokra Gora.

The project is funded by USAID and UNDP, implemented through cooperation with local partners. It means improvement of tourist infrastructure and quality of service providers along the paths - marking of trails, construction and restoration of mountain lodges, private accommodation, etc.

Trails along Via Dinarica have more than 100 stages, not all marked, but certain infrastructure already exists, especially in Slovenia, Croatia and Montenegro, while some of the trails in Bosnia and Herzegovina and Albania are marked with the support of international development agencies.

Via Dinarica as a product is promoted and placed on the foreign tourist market through various tour operators in the Balkans.

The prestigious magazine National Geographic has ranked Via Dinaric in the world's best destinations for 2017.

Explore Serbia
Explore Serbia is an organization that develops and promotes adventure and rural tourism of Serbia and the Balkans. We are adventurers who combine our personal experiences, interests, and knowledge in creating adventure tours.
Previous post5 tips for dressing, equipment, and food for all-day activities in nature
Next postSomething about the history of hiking in the world and Serbia